What is the best season to see northern lights?

When the nights slowly get darker in autumn, the auroras come back to the Arctic skies. Usually, the first auroras of the season can be seen in Ivalo around end-August. The months to follow, September and October are some of the best months for aurora borealis, and for several reasons!

First of all, the aurora activity is usually much higher around the equinoxes in Autumn and Spring as well. This is when we usually experience the brightest and most spectacular northern lights of the season. The Earth’s magnetic field passes through more of the solar wind during the few weeks surrounding equinoxes. This results in the higher frequency of auroras, even with possibility of sudden and unexpected storms! Higher aurora activity during equinoxes has been proven statistically over the course of many decades.

Secondly, the weather is just amazing in autumn! It surely starts to get colder, around 0°C…–10°C at night, but the temperature usually stays above zero during daytime. We are yet far away from the winter frosts, and if you find it difficult to cope with cold, this might just be the best time for you to travel to Lapland. Autumn foliage is also very beautiful to see at daytime with amazing yellow, orange and red colours.

Thirdly, autumn is still relatively low tourism season in Lapland. Ivalo, for example, is very scarcely populated area anyway, and you don’t get to a lot of people even in winter. However, in autumn you can barely see anyone here! If you are looking for total relaxation and tranquility, autumn is definitely your season!

Known these facts, I decided to pay Aurora Village a visit in September 2017. The aurora forecast was promising, but the weather was very bad in Rovaniemi, my hometown, and everywhere else in Finland. I called the village so that they were expecting me.

I arrived just in time for dinner, and had a few hours to relax after my trip.

11PM, the sky is crystal clear, but no auroras in sight. I’ve started to worry a little!

But then, a faint green band appeared in the sky! 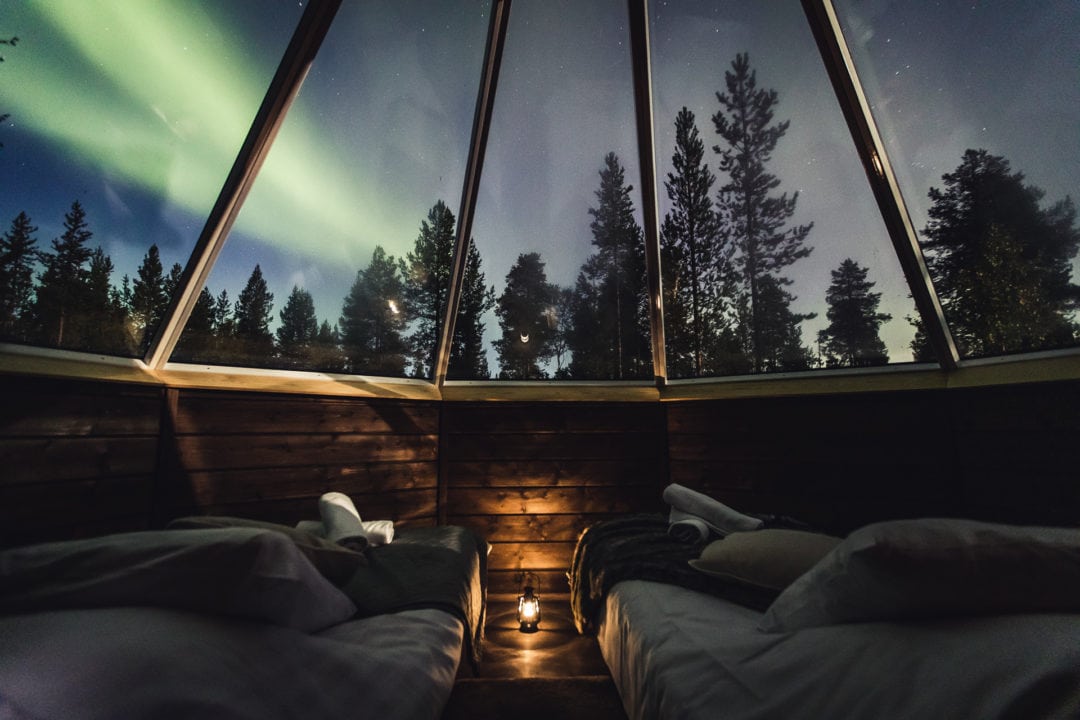 Northern lights were intensifying quickly, and in about 15 minutes, the whole sky turned green! 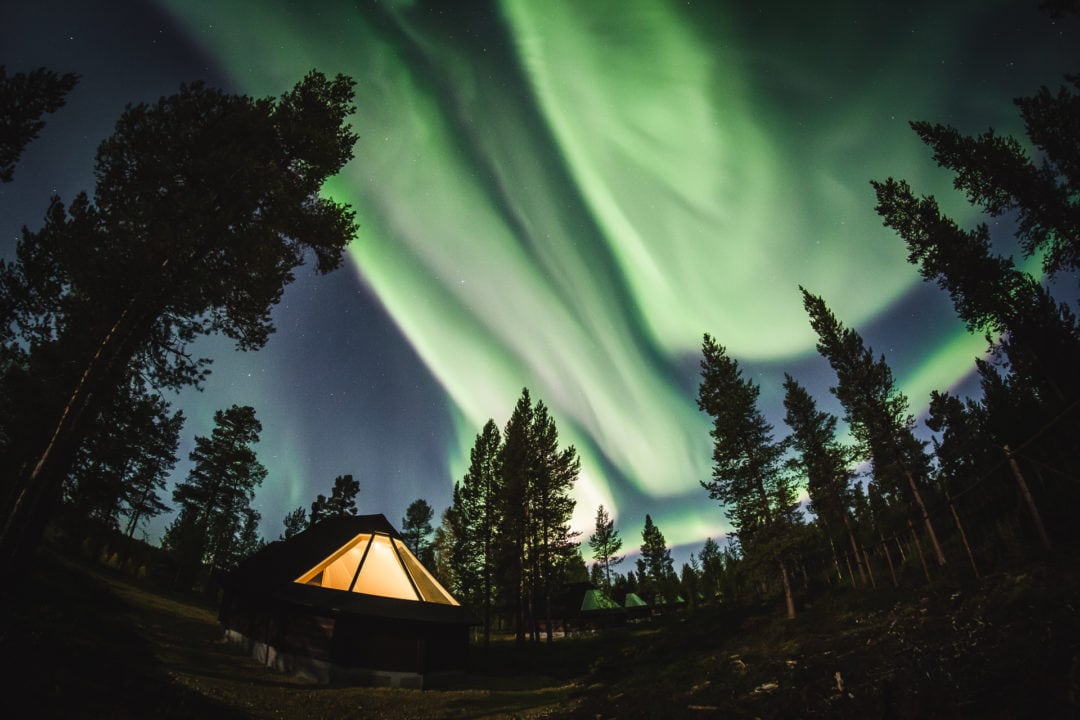 I’ve teamed up with Aurora Village’s boss, Mr. Juha Tuunanen to take pictures that night. We started running around the village, not knowing where to put our cameras! The auroras were changing direction all the time, and moved very fast. This is just a classic. You wait for many hours, and then for several minutes you are just running around like a madman. 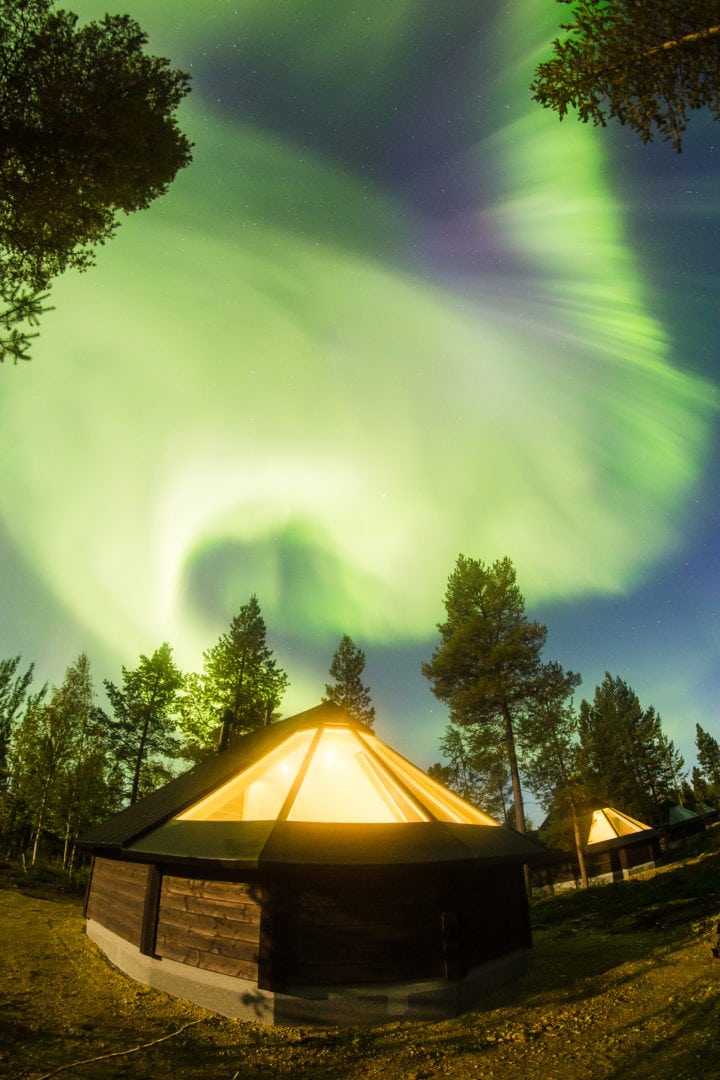 At one point, a huge corona opened above our heads, and we’ve seen beautiful colours of yellow and pink, in addition to the usual green! 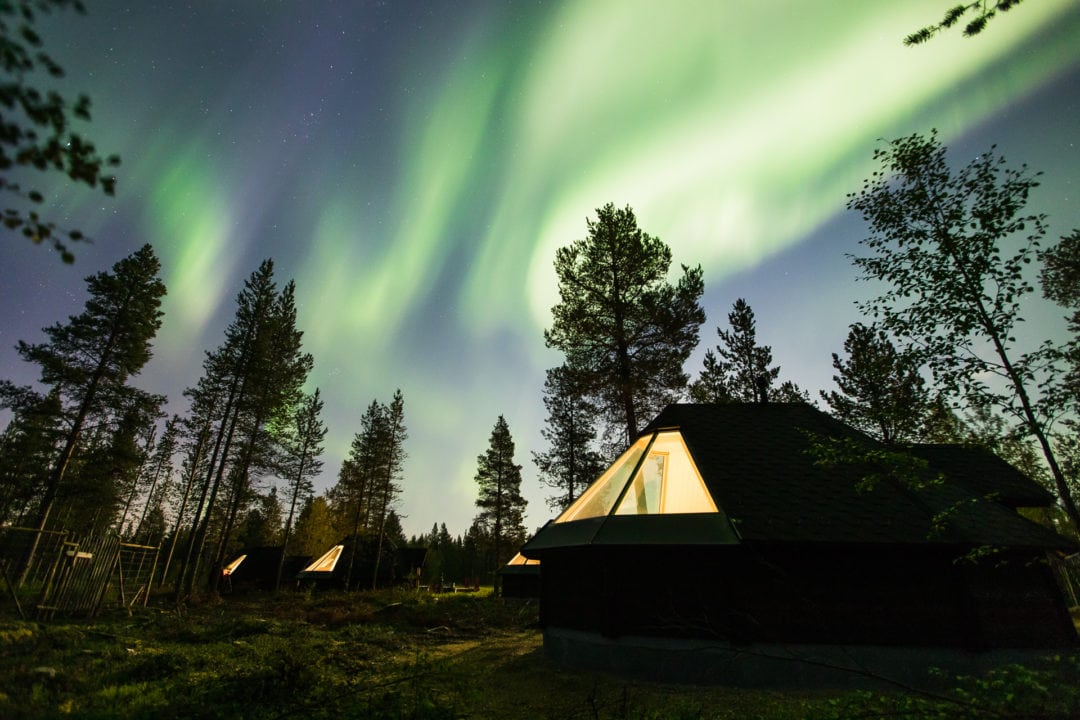 Aurora Village is my favourite northern lights village in Northern Lapland, because each cabin has a clear view of the sky. During the regular night, you usually see the auroras in the northern direction, but during an aurora storm, you can observe the auroras everywhere, and above your head. 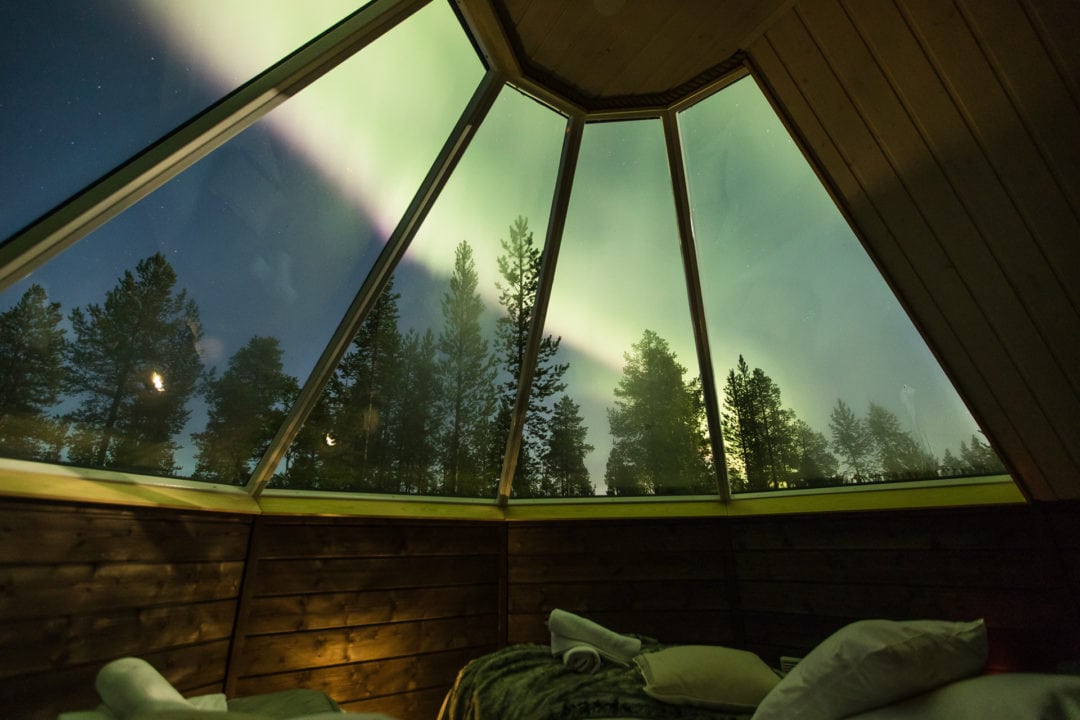 Even the main restaurant & reception at Aurora Village got its share of auroras that night! 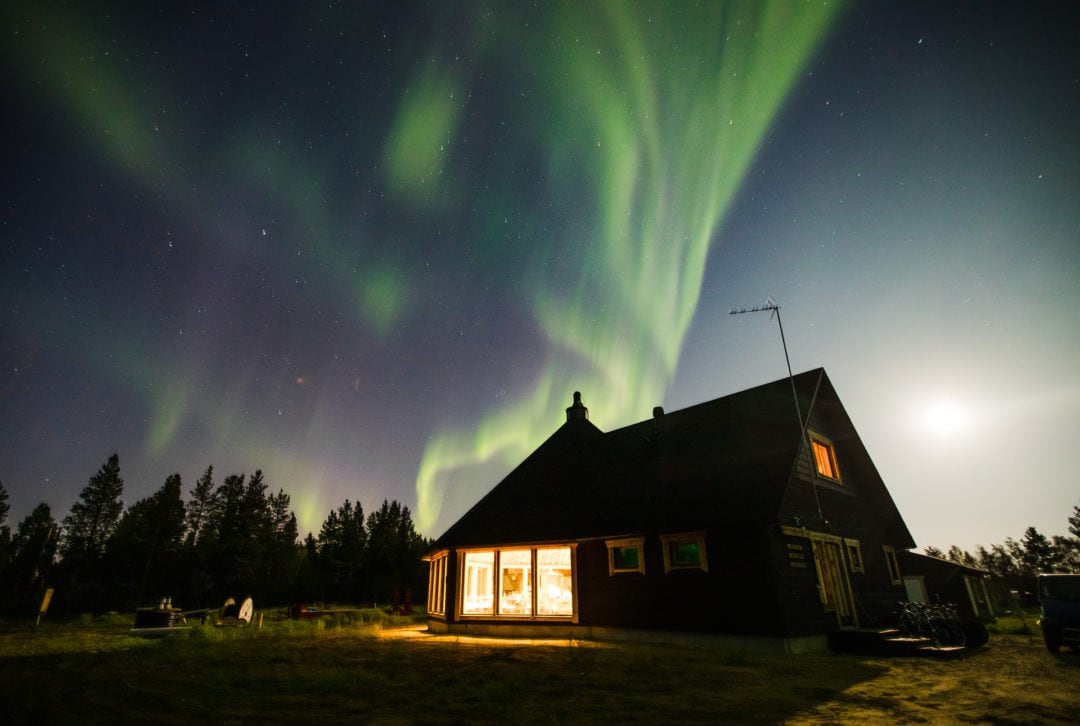 I’ve also made a little video about the northern lights that we’ve seen on that night of 8th of September 2019. See below!

Having made some stunning northern lights photos from the glass igloos, we’ve headed with Juha into the wilderness. We drove a long way by a narrow gravel road, and started to walk into the forest. Juha took me to a huge stone in the middle of nowhere. I was really surprised how huge it was!

The auroras were taking a break, and we made a little campfire while waiting. We also explored the stone, and found a way to climb there. We started experimenting with the photos. 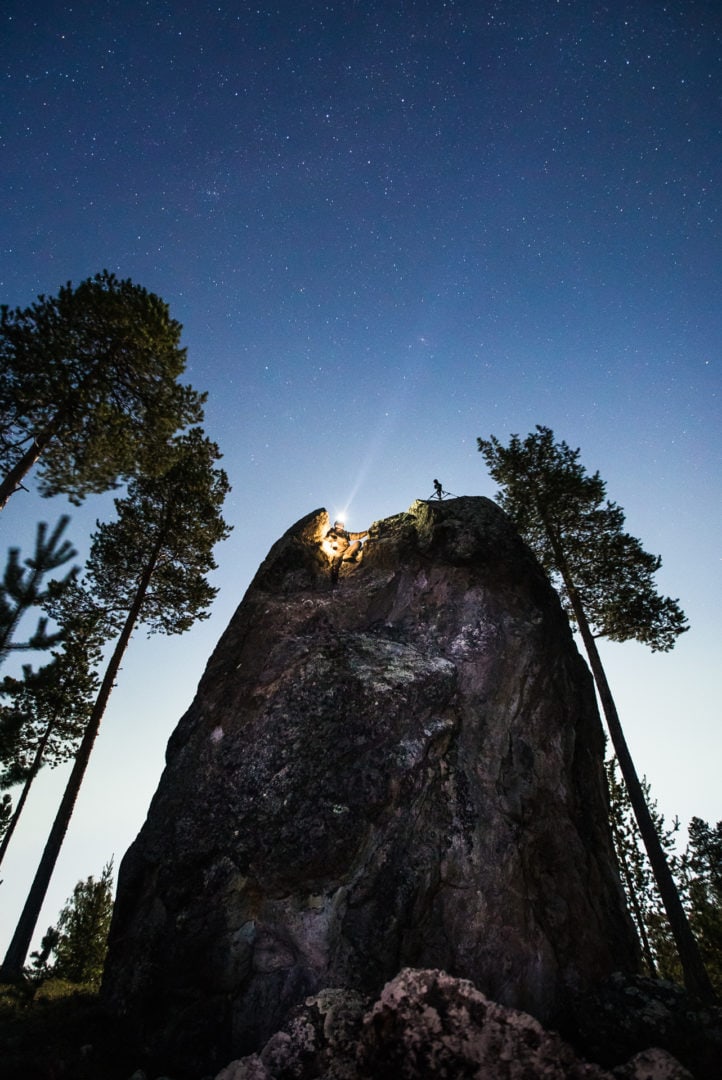 Even with just the starry skies the experience was incredible!

Soon, the auroras returned, and we made more aurora photos.

The auroras were not as powerful that of few hours ago at the Aurora Village, yet we made some nice shots, and most importantly, we were enjoying ourselves! I’ve must have climbed the stone a dozen times. 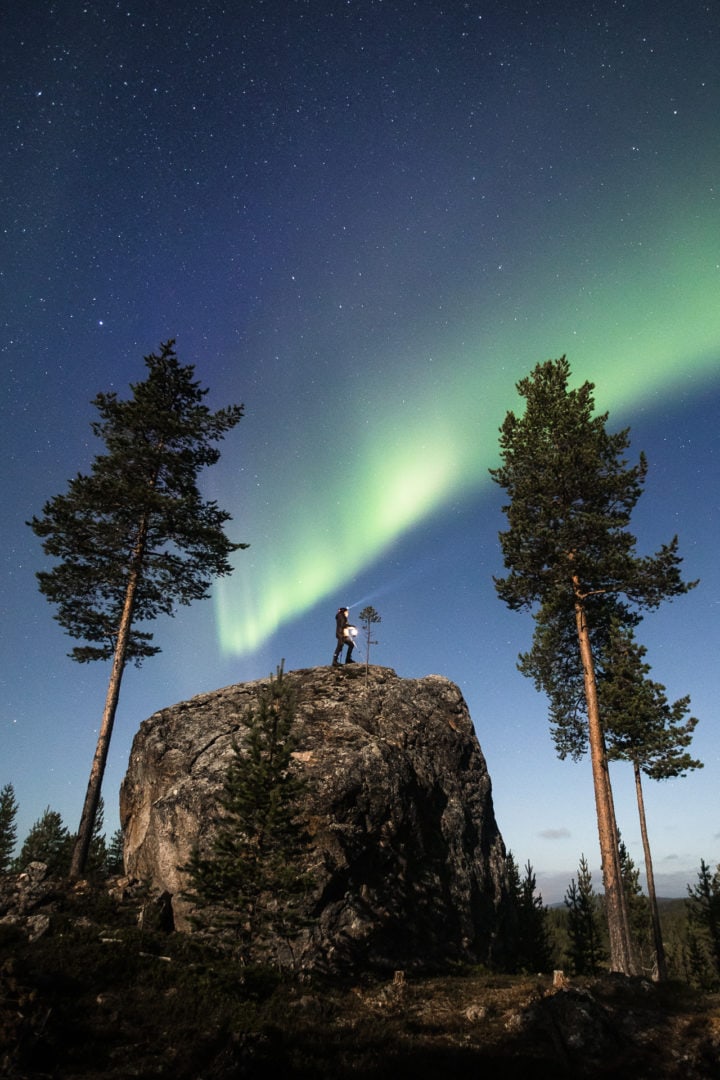 By the time the auroras subsided, and we were finished, it was already 3.30 am. Time to go home! Luckily, a hot shower and a warm and cosy bed was waiting for me at aurora cabin. I’ve slept like a baby! 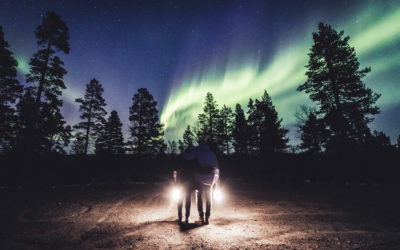 The stunning autumn colors and magnificent Northern Lights are arriving soon at Aurora Village in Lapland, Finland. The Autumn season is the perfect time to travel as the air is cooler but not cold, and nature is giving its best with breathtaking colors. 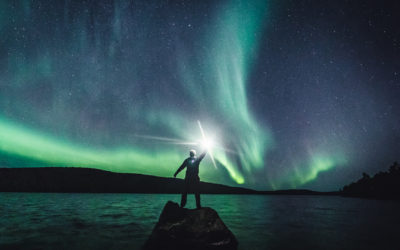 Stay minimum 4 nights 15.-30.9.2022 and we guarantee, that Aurora Borealis are seen from our property or we pay your accommodation. 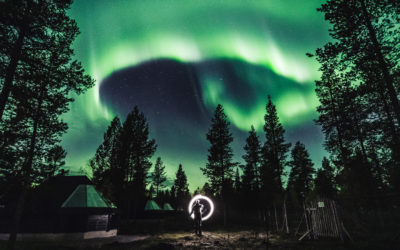 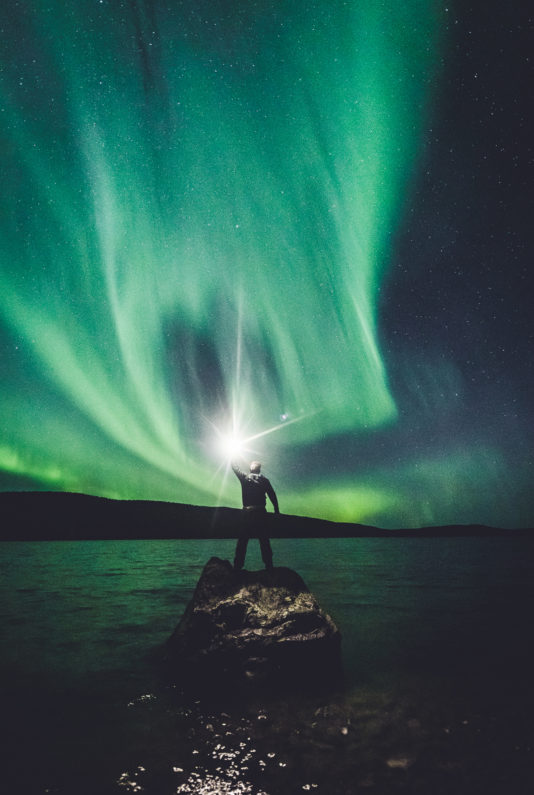